Back in June I bought some ivy for this little nook in the entry way of our apartment building. (read about it here) I called it guerrilla beauty.  I put the ivy there but didn’t tell anyone for weeks. Just before departing on a long vacation, my wife asked the concierge, Alice, if she would water it while we were gone.

Well, about an hour later, I came walking in to the foyer while Alice was cleaning. She had a HUGE smile on her face and approached me saying, “I NOW know who put the ivy there!”

I replied with a rather fake, “Oh really! Who?”

Alice’s smile just got bigger. Then she spilled it all out as only a busy body Parisian concierge could do, “EVERYBODY’S been asking me who it was, but I didn’t know….no body knew…. but now I know…and I’m going to tell everyone!”

Alice evidently kept her word because a few days later the older, dignified woman, who lives one floor above us, stopped me on the stairs and expressed her gratitude.  “I want to thank you for the plant that you placed in the entry way. Yes… I appreciate it more than you realize. Merci Monsieur!”

By winter, the ivy had died off, but I replaced it with a pink clyclamen and now with this tall red azalea. It pleases me greatly to do something SO SMALL that brings a bit of beauty into the our shared space.

Look around where you live or work or hang out…..is there a need for some guerrilla beauty? I’d love to hear about it. 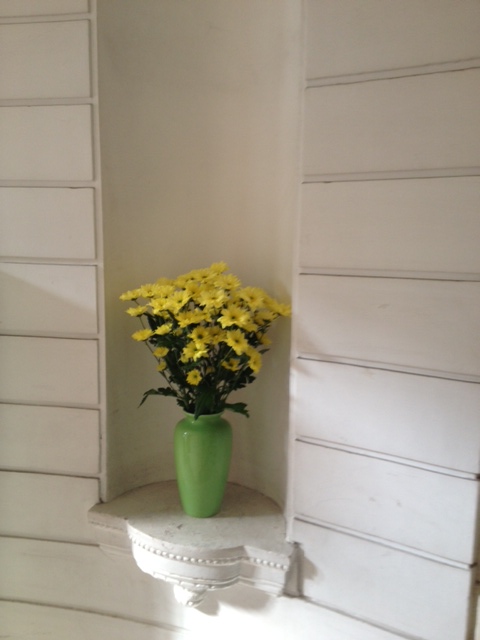 ← A Cache-Cache* Moment
The Cry of Body and Soul →