So we did Christmas – but what did it mean? 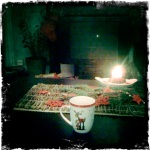 I hope you had a nice Christmas celebration, I did. But now it is the day after and I sit on my couch, coffee in hand, wrapped in my blue/green robe and I ask myself what was that really all about. It is incredibly easy to miss the big picture of Christmas because we get too preoccupied with party preparations, gift getting, dining room decorations………. and you probably don’t need reminding of that. If we turn to the religious side of the celebration, we get closer but still there is something bigger than crèches, choirs and crowds all worshiping a baby who came to start a new religion called Christianity.

To me, I see the birth of Jesus as a mega-shift in the way God had been communicating with humanity. Don’t get me wrong here, it is not as if he was out there trying out different advertising techniques. It is more like he had been waiting for us (humanity, that is) to grow up to the point of really understanding what he was trying to tell us. We had to grow out of some of our more infantile (and barbaric) notions such as simply killing anyone who had a different religion (ok, we haven’t quite completely grown out of that one) or thinking that all God was interested in was the sacrifice of a really nice cut of meat or that our relationship with the divine was all about a piece of land at he seemed to promise to our clan/tribe/nation to live on (ok, some of us still are working on this one as well)

But here’s what I see as at least part of the big picture, the mega-shift….that the divine creator made a change from using top-down techniques such as prophetic rants, kingly decrees, engraved commandments, catalogs of rules to a much more subtle, natural, organic, holistic approach…I love the way Kester Brewin puts it…

“Rather than shout down to us from the top of Everest, God would climb down into the valleys below and join us, a reborn God now inside the system – ‘incarnate’ being in the same body as us, one of us and therefore able to speak to us unmediated in our own language and idiom. Totally within character, God saw what needed to be done, took the plunge and became nothing. He stripped away all power, might, knowledge, glory, metaphysicality… all that could obviously signify divinity was ripped out, all preconceived ideas of God-ness were discarded and torn form him. His self was refined and reduced down and down to pure essence, to the smallest possible format with no more than the most fundamental resources, to the very basics of unadorned life: a single sperm with only enough strength to breach the walls of an ovum.”

So at least one lesson here for us is this: Isn’t it time we abandon the top-down methods of forcing our faith on people and work on a more incarnational approach. I know many of you are already on to this and love being encouraged by your stories. I think we stand at another mega-shift in communication. Christianity has spent the past 2000 years, communicating its message from a position of force, dominance, power, control and manipulation. To me, at least right now, the message of Christmas is that we need to take our cue from this single cell of divine sperm and figure out how to be born again in how we live out our faith…a way that is simple, beautiful, creative, holistic, contagious, viral….one that can flow in to all sorts of contexts and cultures, spiritualities and religions…one that is concerned with individuals instead of the masses….concern over control, forbearance over force…Hopefully you get the picture.

Category : a fresh look at jesus

← A night at the opera
After Christmas Let Down →