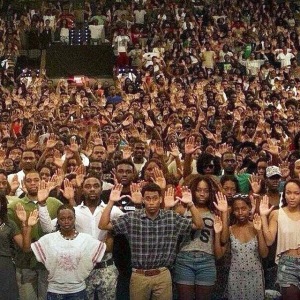 I can no longer be silent on the events in Ferguson, Michael Brown and the fate of other young men of color in my home country. I thank my friend, Tarani Joy who has called me (and others) out on our silence.

I would like to lay this situation against 2 great writings….because past stories tend to guide us as we live out our present stories.

1) Les Misérables by Victor Hugo: Think about it. Jean Valjean was a guy who had a rough beginning, who made some bad decisions, but because of grace shown to him, was able to pull his life together and spread grace to many others. Despite all of this, he was endlessly and unmercifully pursued by policeman Javert who insisted that Valjean be punished for his crime of petty thievery. Without going through the comparisons, the unescapable truth you come out with on the other end of Hugo’s complicated tale is that legalistic, heavy-handed policing is just PLAIN WRONG.

2) The Hebrew Scriptures: It’s easy these days to do a word search with an online Bible (www.biblegateway.com). Try it on the word “justice” and see how prevalent it is. My search landed 121 instances in the Old Testament. Scan through these verses and you’ll get a good sense of how important justice is to God.

There are many prophetic warnings to leaders who “pervert the justice” which is due to the vulnerable of society. In contrast, there is praise for leaders such as King David who “administered justice and equality to all people.” The psalmists declare repeatedly that “God loves justice and equality.” I think my personal favorite comes from the prophet Michah who cuts to the bottom line: “What does the Lord require of you but to do justice, and to love kindness, and to walk humbly with your God?” This applies to all of us…even those in authority and especially those in authority who carry guns.

(Keep in mind this definition of “justice” is not punishment, as we sometimes seem to use it today. It is more like doing what is fair, right or righteous. In fact, “justice” and “righteousness” are used interchangably in the French and Portuguese Bibles, as in “Seek first his kingdom and his justice….Matthew 6:33 )

So, may I encourage you to live out justice, righteousness, kindness and grace in your own community. Vote for leaders who do the same. Expose leaders who don’t.

← The Insignificant Becomes Significant
Life is… →

One thought on “Les Misérables of Ferguson”